This morning members of the Kurilpa Futures Campaign Group joined together to highlight the first development application resulting from the Kurilpa Master Plan – even though it has yet to be officially implemented. The development had been approved for 2 15 storey towers under the South Brisbane Neighbourhood Plan, but a new DA has been submitted which takes on the more “libral” approach of the KMP.

Our media release can be found here…. 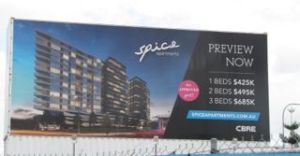 The KFCG (Kurilpa Futures Campaign Group) group invites  you to participate in a wake on Wednesday 19th at 10:00am at the corner of Bouquet and Montague “Spice”
Some of you already know, but for those who don’t, the KFCG had anticipated and supported responding to the Bouquet Street development when the DA (Development Application) was actioned for the site. Last Wednesday Helen Abrahams notified us that the DA had been actioned and posted.  In response the Kurilpa Futures Group has organised a wake, highlighting the lack of consultation and complete disregard for restrictions as stated in the current plan. The event also highlights the lack of consultation and complete disregard for restrictions as stated in the current South Brisbane Neighbourhood Plan. On the day we will meet, march and sing to the tune of “When the saints go marching in” AKA “When the plans go marching in”
So we encourage you to come along and participate. Suggested dress for the occasion is black arm bands, capes and plastic flowers, and bring along your voice to sing our protestations. Thanks to Patrice for putting together some very apt lyrics to traditional hymns for the occasion, and there might also be some live music to accompany us.

We would love it if you could join us.

Below are some details of the development taken from Helen Abraham’s submission.
25 Bouquet Street, South Brisbane A003981608
There is an existing approval for twin 15 storey towers at 25 Bouquet Street, South Brisbane, which is immediately beside the Go Between Bridge with a Montague Road frontage. However the owner has lodged a new application for a 26 storey tower and 16 storey tower for 396 units.  This application is the first within the Kurilpa Master Plan Area and it seeks to maximise the height and density on the site prior to the Kurilpa Master Plan being incorporated into the City Plan.
The application is impact assessable so I would encourage you to make a submission prior to 28 November 2014 – that is just 14 days away.